On December 10, we attended our second qualifier of the year at the PlaySpace. We would like to first thank WeLovePi for hosting this event. At this qualifier, we were ecstatic to receive 1rst Place Inspire Award, Control Award, and Finalist Alliance Captain. In addition to this, we were nominees for every award, including receiving 2nd place Connect, 3rd Place Motivate, 2nd Place Design, and more. We would like to thank team GOATS for being a great Alliance partner.

On December 4th we participated in the first San Jose Qualifier. We were able to press the beacons in the tele-operated period, and reliably score the cap ball in endgame. Because of this, we were 3rd seed at the end of qualifying matches, and with the help of team 4998, Q, we won winning alliance, 1st pick. We also won the 2nd place Inspire Award, and thus qualified for the NorCal regionals. Since then, we've been preparing for our second qualifier, San Jose 2.

last  qualifier  of  the  season!

Catch us at the Auburn Qualifier in Forest Lake Christian School on January 30! 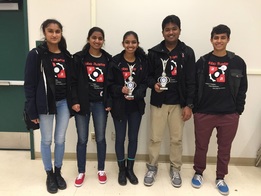 At the Fremont Qualifier, we succeeded in qualifying to Regionals! Our robot landed us in 4th place after the qualifying matches. After teaming up with the 1st seeded team, FTC Team 5353: Pink Fruffy Unicorns, we were able to make it to the final match.  In the end, we won awards for Finalist Alliance and 1st Place Inspire!
Thank you to FTC Team 548: Geek Squad for hosting the qualifier and FTC Team 5353: Pink Fruffy Unicorns for being an awesome alliance captain!  We're looking forward to competing again at NorCal!

Our team will be participating at the Fremont Qualifier in Mission San Jose High School on December 19. Hope to finally start the season!!! 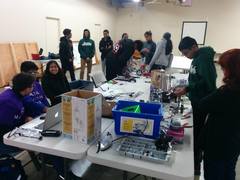 Our team will be participating in the Play Space #1 Qualifier on November 8. Hope to have a great start to the season!
UPDATE:
This qualifier was cancelled due to low team sign ups, however a scrimmage was held at the Play Space during that time.